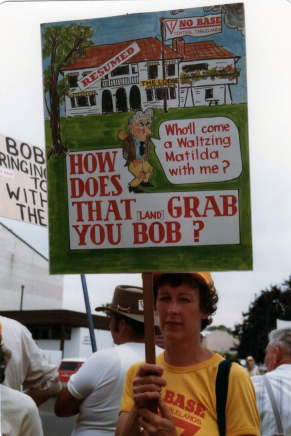 Click the button above to listen to the radio documentary.

The history of this successful farmers’ protest movement is in production for release by On The Stone Books. Author, Marje Prior, documented the movement in the mid 1980s with a series of oral history interviews and produced a social history radio documentary for ABC Radio, called No Base Women.

During the mid 1980s the labor government wanted to established army bases for artillery ranges in rural NSW. This caused a widespread grass roots movement known as ‘No Base’ driven predominantly by women who embarrassed the labor government and stopped their land acquisition plan from proceeding. Marje Prior interviewed women throughout the Central West and Cobar regions to record their stories for a radio documentary she had broadcast by the ABC Social History Unit on 9 July, 1989.

Pictured is Pam McRobert with one of her signs.  Photo taken by Joyce Pearce of Sofala.